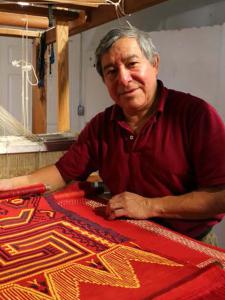 Armando Sosa is an artist of exceptionable ability, whose textile work is not only highly original, innovative, and of an exquisite quality, but also draws deep into the wellsprings of the craft and cultural traditions of his native Guatemala. As an active member of the Princeton community since 1993, Mr. Sosa has shown dedicated service to his community by teaching and passing on his skills and knowledge through workshops and demonstrations locally, as well as in Camden, New Brunswick and Newark.

Mr. Sosa’s important work has been recognized by numerous public and private institutions across New Jersey, including the Camden Center for the Arts, Princeton University, the Hunterdon Museum of Art, the Monmouth Museum and the Newark Museum. In 2004, Mr. Sosa was selected as a featured artist forTranscultural New Jersey, a state-wide visual arts program developed by the Rutgers University Center for Latino Arts and Culture (CLAC) that toured the state in 2004-2005. More recently, Mr. Sosa’s intricate tapestries have been selected for exhibition at Johnson & Johnson in New Brunswick (2008) and at Capital Health Medical Center in Hopewell (2011), the latter through a competitive process organized in partnership with the Brodsky Center for Innovative Editions at Rutgers University. In 2000, the New Jersey State Council on the Arts awarded Mr. Sosa the recognition of Master Artist.