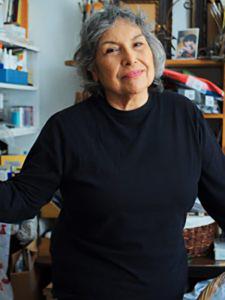 Yolanda Lopez was born in 1942, in San Diego, California and is known as a muralist, painter, educator, film producer, and printmaker. Her work mainly focuses on the experience of Mexican American women and challenges the ethnic stereotypes that are often associated with them.

Another famous work of Lopez titled Who’s the Illegal Allen, Pilgrim? which highlights an angry man in Aztec attire holding a crumpled up paper titled “Immigration Plans.” This political poster was made in 1978 in a period of debate in the United States that resulted in the passage of the Immigration and Nationality Act Amendments of 1978.

Lopez has also produced two films: Images of Mexicans in the Media and When you Think of Mexico, that challenge how the media portrayed Mexican and other Latin Americans. She has also created exhibitions and toured nationwide that feature works concerning immigration in the U.S. 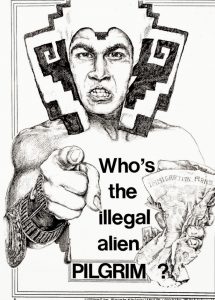